Fear of Living by Ron Kirkwood 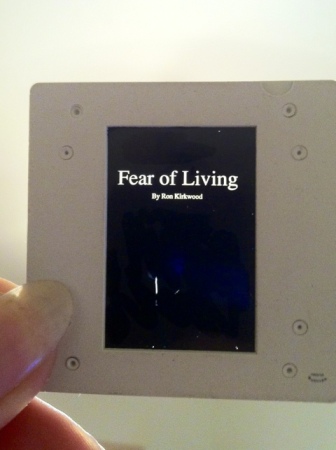 Until recently, I never understood the name my Dad chose for his book.

It’s been 9 months since my Dad died 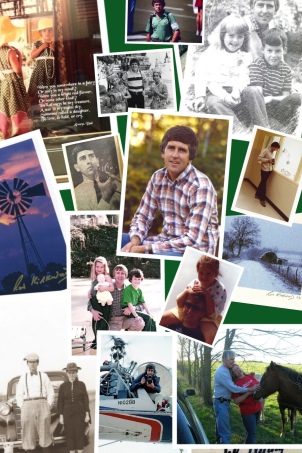 I miss you so much Dad!

You made the world a more beautiful place to live in.

You endured so much and once you knew I could do it alone, you escaped your prison.

You are a part of me & you’re giving me the strength to keep on doing what you would want.

Thank you Daddy. I got this one. I just want YOU back.

After my father‘s death on June 21, 2011, I sent copies of the “Will of Ronald Richard Kirkwood” via certified mail to the following:

I received all 4 notifications back signed and delivered. Mary Catherine Kirkwood *, (as listed this time), (see photo below) was then appointed personal representative of my father’s estate & that he died intestate. NOTE: Mary * was appointed co-guardian and NOT CONSERVATOR in the Guardianship proceedings (Case No: 10CD-PR0059), despite her requests & application. The Circuit Court of Cedar County, Missouri Probate Division, Judge Dennis D. Reaves, then put all fiduciary responsibility back in her hands on September 30, 2011?!?

Clearly this makes absolutely no sense. 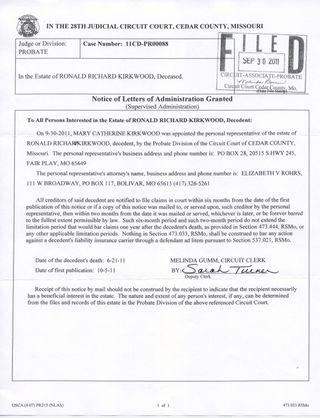 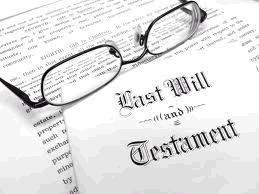 Guardian crimes get ‘cover’ from government agencies by Janet Phelan

Recent admissions by government agencies pledged to provide oversight for those handling the affairs of the most vulnerable of American citizens — the elderly and disabled — point to  systematic ‘cover’ being granted professional conservators and guardians.  The degree of ‘cover’ provided those pledged to care for the elderly and infirm could be seen as providing absolute immunity for acts of criminal misconduct.
Guardianships (also called conservatorships in some states) are generally initiated through court proceedings when there are allegations that a person is lacking capacity and unable to care for his own affairs.  Upon the appointment of a guardian, the alleged incapacitated person may lose all access to his property and assets and may also lose the rights to make his personal decisions, such as where he will live, whether or not he may see family and friends and whether or not he will receive medical treatment.

He also generally loses the right to hire an attorney to defend against this grave revocation of rights. It must be stressed that these guardianships are launched on allegations alone, and no proof of incapacity may be provided or required.

Ernest Moore was alarmed when he received the reply to his complaint to the California State Bar. The Los Angeles man had provided proof to the State Bar that attorneys had lied to the court, misrepresenting assets belonging to his mother, who is under a conservatorship.  After denying the merits of his complaint, the responding SB attorney advised him that “the court where the matter is pending is the appropriate forum to determine whether either (attorneys named) engaged in improper conduct. If that court makes a specific factual determination of misconduct . . . you may contact this office with a copy of the court record for further consideration.”
It has been the long-standing mandate of the State Bar to discipline attorneys. A call to the media representative for the California State Bar confirmed the suspicion that there was no legal basis for the statement made by the state bar attorney that the court was the proper venue for Moore’s concerns. Moore’s complaint, incidentally, included transcripts which backed up his contentions that the attorneys lied to the court.
But Moore’s complaint focused on attorney misconduct in the guardianship of his mother; and true to the mandates of ‘cover’ for those involved in guardianships, the State Bar denied his complaint.
Similar response letters have been issued by the California Professional Fiduciaries Bureau. When Janis Schock received a notice that her complaint about misconduct by professional conservator Ron Olund had been closed, she was equally surprised to learn that she, too, was advised that the proper forum for her complaint was the court where the proceedings took place.  The PFB was so embarrassed by the attention given this misstatement of law by their analyst, Angela Bigelow, that they reopened Schock’s complaint. And shortly thereafter, closed it again.

Schock was actually fortunate. Most complainants to the PFB find that they receive no notification that their complaints have been closed.  It was only after three or four requests for information as to the dispensation of his complaint that Joseph Quattrochi learned his complaint had been closed seven months prior. Jamie Lamborn received a phone call advising her that her complaint was being closed. Her requests that this be put in writing have not met with a reply. These illustrations are typical rather than the exception.
The short history of the PFB has been marred by difficulties. A Los Angeles Times series in 2005, “Guardians for profit—when a family matter becomes a business” shocked its readership with disclosures of misconduct and predatory behavior by unlicensed fiduciaries and guardians.

Responding to the public outcry, the California legislature passed a package of new laws.  Entitled the Omnibus Conservatorship Reform Act of 2006, the Act mandated the formation of a new agency, the Professional Fiduciaries Bureau. This new bureau, housed in the Department of Consumer Affairs, was charged with the responsibility of licensing fiduciaries and conservators and also investigating and disciplining allegations of their misconduct.

Governor Schwarzenegger signed the bill into law in 2006 then proceeded to line-item veto all funding for the new agency for two years running.  The PFB did not open its doors for business until 2008.
A recent response to a public records act confirmed what had been suspected concerning the Bureau, which had, according to many complainants, been functioning without any apparent rudder or rationale in terms of its dispensation of complaints. In an email dated January 27, 2012, DCA press officer Russ Heimerich admitted that the PFB had no written guidelines in terms of a policies and procedures manual.
The implications of that admission deserve further scrutiny. As the PFB deals with matters of alleged criminal misconduct, its functioning could be considered to be quasi-legal.  Imagine, for a moment, going to court to discover there were no procedures and no guidelines governing your case. Imagine calling 911 for assistance to find that the police had no guidelines for determining their response to your call. The result would be chaos.
In addition to failing to produce written guidelines for its functioning, there are other notable gaps in the functioning of the PFB. The  board which is to oversee the PFB functioning has a glaring omission — the seat on the board reserved for an elder advocate has remained empty now for years.  The other board seats, including professional fiduciaries and members of the public, are filled but the board has now met for session after session without the input of someone with the interests of the elderly foremost in mind.

It gets worse.  Recent public records act requests by complainants have resulted in a curtain of secrecy being drawn.  Complainants who wish to see what sort of investigation and conclusions were conducted by the PFB are finding that their requests to see their files are being denied.
A recent email by PFB chief Gil Deluna cited 6254 f of the Government Code as the justification for his denying the production of the file to a complainant.  However, 6254 f affirms the right of a victim to see his complaint file.

Deluna has not responded to repeated requests to discuss his interpretation of 6254. Press officer Russ Heimerich has only stated that the perception that a victim may get his file is “wrong” and adamantly refuses to discuss why.

The annual report of the PFB confirms its dismal performance record. The report (http://www.dca.ca.gov/publications/09_10_annrpt.pdf) states that for the fiscal year of 2009-10 there were zero criminal or civil actions filed.  There were zero cases initiated by the Attorney General and zero dollars ordered or received for consumer restitution. To its credit, the Bureau reports it did deny one license application for a professional fiduciaries license.
Equally, the office of the California Attorney General recently returned a bundle of complaints by victims of California conservatorships. An email from the Executive office of the AG explained that the office does not cover probate. Requests for the legal authority allowing AG Kamala Harris to ignore crimes committed by conservators have not engendered a reply.
If this all seems very technical, consider the overall picture. Someone goes to court and says that you can’t handle your own affairs. There is no attempt made to prove this allegation, and, as a result, you lose all access to your money and cannot hire an attorney to get it back. In addition, you may not be getting medicine you need, or you may be getting medicine you don’t need. You have no right to object to this, and if a family member tries to intervene, the guardian may have a restraining order issued against him.  You are subsequently isolated and may be withheld food and water, or you may be visited by a nurse with a hypo full of deadly morphine.
This appears to have been the fate of a growing number of conservatees, including Corinne Bramson, Lawrence Yetzer, Elizabeth Fairbanks and Raymond Horspool, to name just a few.
And after your funeral is paid for, out of your assets of course, the guardian and his attorneys go to the bank.
Is this picture getting clearer?

You can support this story by voting on Reddit:  http://www.reddit.com/r/conspiracy/comments/qepek/guardian_crimes_get_cover_from_government_agencies/

Janet Phelan is an investigative journalist whose articles have appeared in the Los Angeles Times, The San Bernardino County Sentinel, The Santa Monica Daily Press, The Long Beach Press Telegram, Oui Magazine and other regional and national publications. Janet specializes in issues pertaining to legal corruption and addresses the heated subject of adult conservatorship, revealing shocking information about the relationships between courts and shady financial consultants. She also covers issues relating to international bioweapons treaties. Her poetry has been published in Gambit, Libera, Applezaba Review, Nausea One and other magazines. Her first book, The Hitler Poems, was published in 2005. She currently resides abroad.  You may browse through her articles (and poetry) at janetphelan.com