Let’s kick this up a notch.  I haven’t written much on my blog lately and I am now ready to get back at it in full force in the very near future.

I need your help. I’m looking for folks who’d be interested in:

I am so grateful to see that the site I started many years ago has almost 23,000 views.  Just imagine what more is in store.

Contact me from link in main menu with subject line “No Mo.”

Something is taking place to bring light to Elder Abuse & Guardianship Abuse.

5 Amazing Facts About Music and Memory

Originally posted on Getting Jazzed About Music

Music has tremendous power over memory. Hearing an old song can take you back decades in the blink of an eye. Psychologists have been fascinated by this connection between music and memory.

Here are five recent psychology studies which demonstrate the intimate link between music and memory.

The link between music and memory is so strong that it can help you learn a foreign language.

Research by Ludke et al. (2013) found that people trying to learn Hungarian, a notoriously difficult language, performed much better if they sang the Hungarian phrases rather than just saying them. The researchers think that the melody may provide an extra cue which helps embed the memory.

People who have suffered traumatic brain injuries (TBIs), such as in a car accident, often have problems with memory.

Music is increasingly being tested as a way to help bring back forgotten autobiographical memories.

A recent study had participants who had suffered severe TBIs listening to number-one songs from their lifetimes to see what memories were evoked (Baird & Sampson, 2013).

The memories brought back were mostly of people or a period of their lives and were broadly similar to those evoked by control participants who did not have a TBI.

One of the reasons music may be so powerful is that it activates such large areas of the brain.

The study found that whether their participants were listening to the Beatles or Vivaldi, largely the same areas of the brain were active.

4. Music can take you back two generations

Classic hits can easily take you back to your teens and twenties.

Most people have particularly strong memories of this time in their lives–psychologists have called it the ‘reminiscence bump’.

But, perhaps surprisingly, one study has shown that people also have mini reminiscence bumps for the music their parents listened to, and even for their grandparents’ music (Krumhansl & Zupnick, 2013).

“These new findings point to the impact of music in childhood and likely reflect the prevalence of music in the home environment.”

Another study has shown that we don’t even need to hear the tune for the memories to come flooding back–the words are enough (Cady et al., 2008).

For a whole generation, the words “Ice, ice baby”, and for another generation “…living in the gangsta’s paradise” are enough to take them back in time.

The power of music on people’s memory is sometimes frightening.

A recent study from Frontiers in Neurologyreported the case of a woman who, one night, suddenly began to hear music playing in her head, like a sort of internal, unstoppable jukebox (Vitorovic & Biller, 2013). The problem continued for months.

When she hummed the songs to her husband, he recognised some of them, but she herself didn’t know what they were or where they came from.

It seemed the songs were so deeply rooted in her memory that she wasn’t consciously aware she knew them. They only came to the surface during these night-time hallucinations.

She was treated with an anti-seizure medication and her symptoms improved a little.

This is the only known case of this kind of musical hallucination.


Orphaned at age 5, this WWII veteran, went on to play first chair trumpet at BYU.

This is a remarkable story from Jack’s military experience. 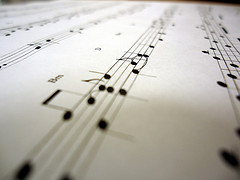 “Music can often make or break a day. It can change your mood, amp you up for exercise, and help you recover from injury. But how does it work exactly, and how can you use it to your advantage?

Recently, Congresswoman Gabrielle Giffords used music therapy to help her learn to talk again. The still unproven theory revolves around the idea that music is represented in multiple parts of the brain and therefore accesses deeper pathways between neurons. Music then helps patients connect the stored knowledge of words through songs and helps create the new connections needed for speech. This same idea has been used for stroke victims in the past, and has been referred to as the Kenny Rogers Effect.

You don’t need to have suffer from brain damage to get the benefits though, lets take a look at how music affects the brain in a more casual sense, and how you can use it to enhance your day-to-day.

You might remember reports back in the 1990s that said that studying while listening to Mozart increases the likelihood of performing well on a test, but that has been disproven in some studies, and in turn, studies have shown some music has a negative affect on fact retention if you’re studying numbers or lists. Still, performing music has been proven to increase memory and language skills, but for listeners, it’s better used as a means to recall memories. It has been shown in Alzheimer’s patients to help with memory recall, and even restore cognitive function. It works for Alzheimer’s patients in the same way it works in everyone else.

When you listen to music you know, it stimulates the hippocampus, which handles long-term storage in the brain. Doing so can also bring out relevant memories you made while listening to a particular song. So, even though the Mozart-effect has essentially been disproven, the idea that forming a new memory with music, and then using the same music again later to recall the memory still appears to be a sound idea. If you’re having trouble remembering something, you might have better luck if you play the same music you were listening to when you first made the thought.”